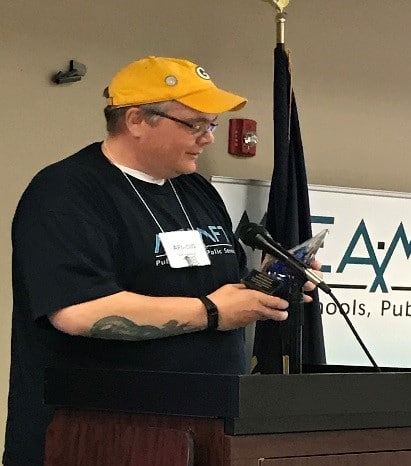 Rich Aarstad is the senior manuscript archivist at the Montana Historical Society where he has worked for the last sixteen years. He served as president of Local 4367 – Montana Federation of Historical Society Workers – “the best damn local in MFPE” – for eight years.

Rich is a native of Libby, MT and a graduate of the University of Montana where he received his BA and MA in history. He has been married to Kim for 28 years and they have one son and two granddaughters.

We need your help.

MFPE is asking each member to donate $3 a month for MFPE PAC and a $2 a month for NEA FCPE/AFT COPE. It’s an excellent investment in your future! Please take a stand for public schools and public services. THANK YOU!

PS: If you prefer to make a cash donation, please write your check to MFPE PAC.
Download the form here and mail your check and form to us at this address: MFPE PAC, 1232 East 6th Avenue, Helena, MT 59601

Several MFPE local affiliates have their own Political Action Committees