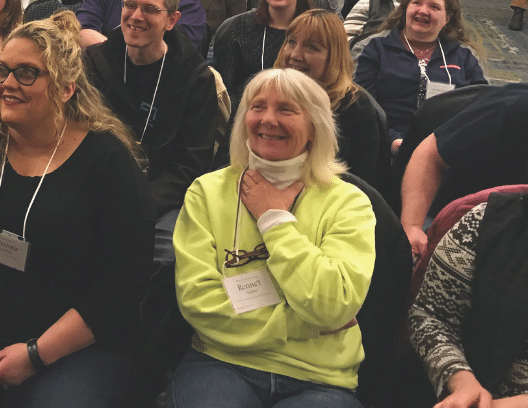 MFPE member Renne’t Sarbu isn’t just the kind of member who shows up on behalf of her colleagues, she gets other members to show up, too. Renne’t has spent the last thirteen years as a contract specialist for DPHHS in Helena. She recently took part in MFPE’s Mobilization and Organizing Blitz, and has led efforts to engage and recruit MFPE members in Helena. We sat down with Renne’t to talk about her work and her involvement with MFPE.

I started my work career in the restaurant business, at the age of 15, being the first “bus girl” in Helena.  After high school and some classes at the Vo-tech, I worked for the State of Montana Highway Patrol in the Records Department. A year later, I landed my dream job at the City of Helena Parks Department.  At first, I was on the end of a shovel, a rake, the clean-up person.  I gradually moved up, learning how to operate equipment, working more skilled jobs, and taking charge of crews. This was all due to the fact that I was employed in a union work place and followed a union contract, which gave a fair shot of advancement to all qualifying members.

During my first years I was subject to prejudices, unfair treatment, and hostile behavior.  I thought this was part of the job, until a union brother said the type of treatment I was being subjected to was a violation of our contract and strongly suggested that I read it.  Wow! I didn’t know workers had rights. This was in the 1970s and a female working as an equipment operator was unheard of in Helena, but because of my union contract, I received the same pay as the men. This was my first time belonging to a union and I have respected unions ever since.

MFPE Advocate:  Where do you currently work and how long have you worked there?
Sarbu: I’m currently a contract specialist for DPHHS Early Childhood Services and I’ve been doing this job for thirteen years.

MFPE Advocate: What’s your favorite part of the job?
Sarbu: Problem solving, researching lost payments, networking with others in DPHHS, and building relationships.

MFPE Advocate:  How long have you been a member of MFPE?
Sarbu: About twenty years.

MFPE Advocate:  When did you get involved in MFPE and why?
Sarbu: I realized that if I want to see change then I have to be part of the change, lead the change, and build reinforcements. I wanted members to realize we are the union and we can make a difference if we stand together and support one another.  We are all stronger together!

MFPE Advocate:  Why would you encourage other co-workers to join MFPE and be active members?
Sarbu: I can’t do it alone, but WE can!  No voice – No choice.

MFPE protects our rights, wages, and working conditions. If every member was involved or active, think of what we could accomplish!  You are not alone; together we fight for each other to assure that we have a voice in our workplace. MFPE is our voice at the Montana legislature to advocate for state employees, educators, our healthcare, and our retirement.  MFPE also provides representation and even legal defense when there is a problem for members. That’s why getting involved and paying dues is so essential.

MFPE Advocate: What drew you to taking part in the member organizing blitz?
Sarbu: I attended a blitz in Denver, not really understanding what I was about to do, but, having faith in my union, I knew I was in for some intense training and hopefully a little fun and relaxing. No to the relaxing part, that didn’t happen, and hell yes to the other two.

I knew this is what members needed — to see their union at work.  Not just MFPE but union members around the country.  Folks should know how hard it is for public employees in states without bargaining rights. We at least have contracts to protect our wages and working conditions, but we must remember that we will lose them if we don’t keep fighting. I wanted to be part of this intense training and I felt I could be of help.