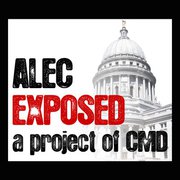 July 15 – Who is behind efforts to kill public employee pensions, destroy teacher tenure, and turn over public services (including schools) to private, for-profit corporations?

Who is spoonfeeding ready-made bills to Tea Party legislators in Montana and other states, passing them off as “grassroots” ideas?

Who is trying to rig elections across the nation, making it harder for college students, seniors and low-income citizens to vote?

Meet ALEC, a secretive group whose secrets are being outed recently.

AFT reports this about ALEC: A nonprofit investigative reporting group called the Center for Media and Democracy has unveiled a trove of more than 800 “model” bills and resolutions secretly voted on by corporations and politicians through the American Legislative Exchange Council (ALEC). The bills and resolutions on ALEC Exposed include model legislation supporting vouchers and attacks on teacher tenure, seniority and layoffs.

The center reports that “through the corporate-funded American Legislative Exchange Council (ALEC), global corporations and state politicians vote behind closed doors to try to rewrite state laws that govern your rights.”

ALEC-written bills, which largely benefit the organization’s corporate members, have been introduced in legislatures in every state—but without disclosure to the public that corporations had previously drafted or voted on them through ALEC. The corporations involved spend thousands of dollars in unreported contributions to ALEC.

Before the Center for Media and Democracy published this collection of bills, it was difficult to trace the numerous controversial and extreme provisions popping up in legislatures across the country directly to ALEC and its corporate underwriters. The center obtained copies of the bills after one of the thousands of people with access shared them, and a whistle-blower provided a copy to the center.

The Nation has a detailed story on ALEC and its model bills.

Check out the ALEC Exposed web site. [Please know that thousands of folks across the nation are right now clicking on this site over and over — so you might not actually get in the first time.]

Who’s working for ALEC in Montana?
According to ALEC Exposed, Montana state chairs of ALEC as of 2011 are Republican state representatives Rep. Gary MacLaren(R-Victor) and Rep. Scott Reichner (R- Bigfork).

Here are just a couple of the bills that emerged in the 2011 Montana Legislature that obviously originated from ALEC:

Opting out of health reform act:

The national AFL-CIO has been also been reporting on the unveiling of ALEC. Read on for a tale of intrigue and scandal:

The spotlight’s been shining pretty bright this week on the right-wing Koch brothers-funded and corporate-backed American Legislative Exchange Council (ALEC).

The Milwaukee Journal Sentinel  examined new information out in recent days and reported that even though Gov. Scott Walker (R) and Republican lawmakers downplayed connections between ALEC’s agenda and their legislative efforts, “the similarities between some Wisconsin legislation and ALEC draft bills are striking.”

The Center for Media and Democracy’s (CMD’s) Mary Bottari told the Journal Sentinel:

When you consider the 20 ALEC bills we identified and the ideas that keep coming out of this [Walker] administration, it just defies belief that there’s no relationship between these bills and ALEC.

The revelations about ALEC’s influence in Wisconsin and elsewhere stem from CMD’s new ALEC Exposed site  that examines more than 800 model bills from ALEC and ties them to bills introduced in state legislatures around the country.

In conjunction with the new CMD site, The Nation published a trio of articles outlining ALEC’s ties to the Koch Brothers,  the drive to block and then repeal health care reform, and its efforts to turn over state services to its private corporate membership.

A investigative piece at In These Times took a detailed look at ALEC’s near puppet-string influence on Republican state legislators with its model legislation to take away the collective bargaining rights of public employees, cripple unions, privatize public services and loosen regulations and lower taxes on corporations.

Bob Baugh, executive director of the AFL-CIO Industrial Union Council, says he welcomes the recent spotlight and reminds us ALEC has had more than 30 years to push its anti-worker, corporate agenda. He says in the early 1980s, the AFL-CIO published information on ALEC’s coordination of state-level legislation and held workshops,

“Running Dogs of the Right,” at the AFL-CIO’s state federations conference in 1996 to expose ALEC’s and other right-wing operations.

CMD’s Bottari says she hopes this newest information on ALEC will spur people to take a closer look at what’s happening in their state legislatures.

An examination of the broad sweep of bills exposes a very radical agenda. Why is Wal-Mart involved with an organization that wants to turn Medicare and Medicaid into voucher plans? Why is Kraft working with a group that wants to privatize the public school system? Why is Coca-Cola going along with efforts to take away voting rights from college students? Why are Bayer and Pfizer and all the big insurance firms in bed with big tobacco?

We hope people will start asking these firms, which are all on ALEC’s corporate board, to quit undermining our democracy through ALEC. PASS THE WORD!