January 17 is Dr. Martin Luther King, Jr. Day. This marks the 25th year that the nation will celebrate the birthday of Dr. King, the great civil rights leader, as a federal holiday. 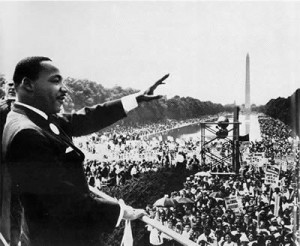 Dr. Martin Luther King, Jr. dedicated his life to working for a more just and equal society. He believed that public education was the great arm of justice. He honored public servants as heroes. He believed in labor unions.

Intelligence is not enough, he said. “Intelligence plus character—that is the goal of true education. The complete education gives one not only power of concentration, but worthy objectives upon which to concentrate.”

That is what MEA-MFT, our members, and our national affiliates, and our brothers and sisters nationwide are proud to do every day.

Also part of the celebration of Martin Luther King, Jr. Day is the 2010 King Day of Service. Volunteers of all ages will work on projects in their communities on Monday to honor Dr. King’s dedication to community service. For more information, visit http://www.mlkday.gov/.

“The labor movement was the principal force that transformed misery and despair into hope and progress. Out of its bold struggles, economic and social reform gave birth to unemployment insurance, old-age pensions, government relief for the destitute and, above all, new wage levels that meant not mere survival but a tolerable life. The captains of industry did not lead this transformation; they resisted it until they were overcome. When in the thirties the wave of union organization crested over the nation, it carried to secure shores not only itself but the whole society.”

“In our glorious fight for civil rights, we must guard against being fooled by false slogans, such as ‘right to work.’ It is a law to rob us of our civil rights and job rights. It is supported by Southern segregationists who are trying to keep us from achieving our civil rights and our right of equal job opportunity. Its purpose is to destroy labor unions and the freedom of collective bargaining by which unions have improved wages and working conditions of everyone…Wherever these laws have been passed, wages are lower, job opportunities are fewer and there are no civil rights. We do not intend to let them do this to us. We demand this fraud be stopped. Our weapon is our vote.”

“Less than a century ago the laborer had no rights, little or no respect, and led a life which was socially submerged and barren….American industry organized misery into sweatshops and proclaimed the right of capital to act without restraints and without conscience. The inspiring answer to this intolerable and dehumanizing existence was economic organization through trade unions. The worker became determined not to wait for charitable impulses to grow in his employer. He constructed the means by which fairer sharing of the fruits of his toil had to be given to him or the wheels of industry, which he alone turned, would halt and wealth for no one would be available…

“History is a great teacher. Now everyone knows that the labor movement did not diminish the strength of the nation but enlarged it. By raising the living standards of millions, labor miraculously created a market for industry and lifted the whole nation to undreamed of levels of production. Those who attack labor forget these simple truths, but history remembers them.

“Negroes are almost entirely a working people…. Our needs are identical with labor’s needs: decent wages, fair working conditions, livable housing, old-age security, health and welfare measures, conditions in which families can grow, have education for their children and respect in the community. That is why Negroes support labor’s demands and fight laws which curb labor. That is why the labor-hater and labor-baiter is virtually always a twin-headed creature, spewing anti-Negro epithets from one mouth and anti-labor propaganda from the other mouth.”