Once again, the Montana Legislature is considering a slew of bills designed to siphon taxpayer dollars away from public schools and give them to private, religious, and charter schools.

MEA-MFT is fighting these bills. Read more about them here. We’ll most likely see more.

Montana’s constitution clearly says the legislature may not give public dollars to religious schools. It’s all about separation of church and state, which our nation was founded on. That’s easy for most people to understand.

Charter schools, on the other hand, sound pretty reasonable to many people.  In fact, however, charters are a back-door approach to privatizing schools for profit. Here’s what you should know about them:

The TRUTH about CHARTER SCHOOLS 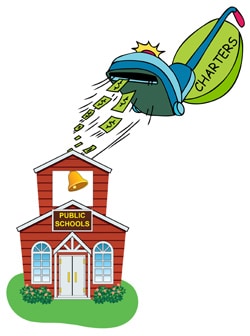 In recent years, the nation’s so-called education “reform” movement has fixated on charter schools as the cure-all for every challenge facing public education in the country. Corporations have encouraged this, because they stand to profit from charter schools.

In Montana, some critics even claim our public school system is somehow “failing” because we don’t have charter schools. But the facts tell a different story.

What is a charter school? Charter schools are taxpayer-funded elementary or secondary schools that have been exempted from some of the rules and statutes that apply to other public schools in a state.

The charter school movement has grown in the past 20 years based on the promise that, if exempted from regulations, charters would outperform traditional public schools because they have more flexibility to meet children’s needs. But it hasn’t worked out that way.

Nationally, charters have a dismal track record: A 2009 study from Stanford University’s Center for Research on Education Outcomes  found that nationally, almost half of charter schools (46%) were no better than neighboring public schools. Over a third (37%) were significantly worse, and only 17% were better than the local public schools. This is true even though many charters weed out the hardest-to-teach students.

Poor accountability: In charter schools, a lack of transparency has often led to misuse of public funds. In Florida and Texas alone, you can find numerous references to charter school personnel who have been indicted for fraud and mismanagement of millions of dollars in tax money.

By contrast, a great deal of transparency accompanies tax dollars that go to Montana’s traditional public schools. For example, both the Office of Public Instruction and individual schools have detailed web sites where citizens can learn about the qualifications of the teachers, administration, and staff; academic goals; test scores; facilities; extracurricular programs; and even what’s on the lunch menu.

The profit motive: In many states, such as Florida, “charter schools have become a parallel school system unto themselves, a system controlled largely by for-profit management companies and private landlords — one and the same, in many cases — and rife with insider deals and potential conflicts of interest.” (“Florida Charter Schools: Big Money, Little Oversight,” Scott Hiaasen & Kathleen McGrory, Miami Herald, 12/10/11)

Change of heart: For these reasons and more, some education experts like Diane Ravitch have changed their minds about charter schools. Ravitch, former assistant secretary of education under George H.W. Bush, once championed charter schools. After seeing “how these ideas were working out in reality,” she wrote in The Death and Life of the Great American School System, she now speaks out publicly against charter schools.

Why mess with Montana’s success? By all measures, Montana’s public schools provide a top-quality education. We consistently score in the top 10 states for student achievement in reading, math, and science. Compare Montana with Florida, a state that has made big investments in charters:

3. Montana’s average 8th grade reading score on the National Assessment of Educational Progress (NAEP) is 7th highest in the nation.  Florida’s is 30th in the nation.

Also, charters in Montana must be administered by a locally elected board of trustees in an existing school district. They must guarantee unrestricted student access (they can’t weed out the hardest-to-teach, as many charter schools in other states do). They must comply with all health and safety laws. Teachers must be licensed and endorsed according to state law and school accreditation standards. And school employees must be given collective bargaining rights.

Yet there are no charter schools in Montana. There’s no need: Innovation and choice already abound in Montana’s public schools. Montana parents and students have many alternative educational opportunities to pursue within the public school system. A few examples:

• The Montessori program in the Helena public schools;

• Billings Career Center in Billings, Hawthorne School for the Arts in Bozeman.

• And there is more: The Montana Digital Academy; open school district and school enrollment almost everywhere in our state; dual enrollment in high school and college curriculum; and easy private school student access to public school education opportunities such as Explore School in Helena.

In any other state, these would be called “charter schools.” But in Montana, these programs operate within the local public school districts. They are subject to the same transparency and accountability measures as other public schools. We don’t have any of the graft and corruption that comes with giving tax dollars to private operators posing as nonprofits.

We should focus on what we know works, instead of throwing precious resources at a parallel universe of charter schools.

Tell your legislators, “no taxpayer dollars for charter schools — nor for any private schools.”