MEA-MFT members and others testified eloquently in support of HB 13, the state pay plan, before the Senate Finance and Claims Committee April 9.

The committee has not yet taken action on the bill.

$38m down from what it was when introduced, HB 13 is not the “deal” state employee unions bargained and ratified. But no one opposed the bill. Instead, those testifying all firmly but politely stated facts and asked that dollars taken be restored.

Below: MEA-MFT members and others line up to testify on HB 13. From left: members Steve Eckels, Kevin Bock, Rowena Harrington, a representative from the Helena Chamber of Commerce, and member Kathryn Kramer. 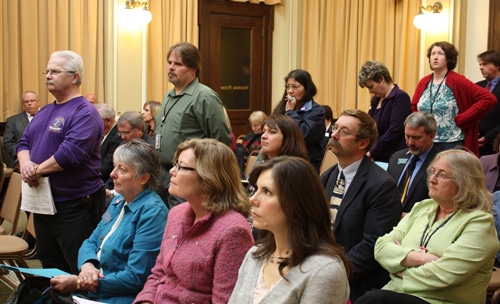