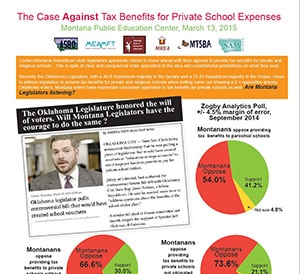 Check out this report from the Montana Public Education Center regarding school privatization proposals pending before the 2015 Legislature. MEA-MFT is a member of MT-PEC.

Montanans are clearly opposed to tax benefits for private schools, particularly once they realize that tax credits divest citizens of their rights to vote, know and have input into decisions of and be informed regarding the performance of schools receiving public support, including support through tax credits.

The Oklahoma Legislature recently dropped similar legislation there upon the release of polling numbers showing opposition to such proposals among Oklahoma voters.  Montana Legislators have had access to similar polling numbers showing overwhelming opposition in Montana since release of our public opinion poll in September 2014, conducted by widely-respected polling firm Zogby Analytics.

Do Montana legislators have the courage to stand against these proposals and honor the will of Montana Voters?

If you want to see how legislators voted on these proposals so far, view our mid-term voting record.  Then reach out to your legislators and ask them how they intend to vote going forward.  The interests of voters and students in Montana’s school districts across the state are hanging in the balance on the outcome of these ill-thought proposals.