How I-183 can hurt Montanans

GAZETTE OPINION:  How I-183 can hurt Montanans 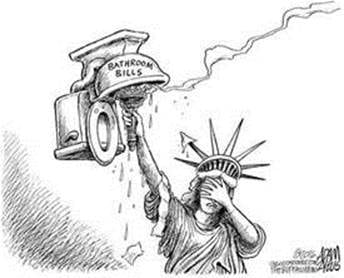 Would you sign a petition for a law to:

• Cause Montana to lose federal educational funding while increasing costs for schools, cities, counties and state government to comply?

• Affect every school and government building throughout the state?

• Restrict the power of Montana charter cities and counties?

• Discriminate against people because of their sexual identity?

• Put Montana on a blacklist like North Carolina was, so major companies, sports organizations and conventions would boycott us based on our discriminatory state law? The North Carolina bathroom bill cost that state $3.7 billion, according to an estimate calculated by the Associated Press earlier this year.

The ballot language for Initiative 183 doesn’t say any of those things. But the text of the proposed law — the language that could actually become Montana law — would cause all of those changes. Initiative 183, which proponents call the “Montana Locker Room Privacy Act,” is out for signature gathering.

The Raleigh (North Carolina) News and Observer recently opined on the disastrous results of that North Carolina law, which has been revised and is still be challenged in courts:

“Most states, even those of the deepest red, learned from the monumental mistake of North Carolina’s Republicans, who passed the now-infamous House Bill 2 transgender bathroom bill, which flew by many denoscriptions.

The North Carolina newspaper warned other states against going down the path of discrimination and financial peril. Montanans should take that advice to heart.

Don’t put Montana on the map as a state that prioritizes discrimination over human dignity.

Don’t support a scheme that would sacrifice our economic prosperity to fire up fear and hatred against transgender folks.

The Montana cities of Missoula, Helena, Bozeman, Whitefish and Butte have enacted nondiscrimination ordinances to promote equal treatment of all persons, including those who are LGBTQ. Initiative 183 would cancel those locally approved laws and forbid any local government in Montana from enacting a law that would conflict with the proposed Locker Room Act.

The ACLU of Montana filed a lawsuit last week, asking the Montana Supreme Court to find that the I-183 ballot language (the brief statement voters would see on November 2018 ballots) and the fiscal impact statement are deficient. The ACLU argues that the ballot language is biased and misleading. The lawsuit says the fiscal statement fails to disclose potential taxpayer costs that were identified by the state budget office — loss of university funding, cost of lawsuits, costs of renovating buildings to comply with I-183.

Fair-minded Montanans can see for themselves. Read the ballot language, the fiscal statement, the proposed Montana Locker Room Act, and the lawsuit at the links with this Gazette opinion at billingsgazette.com.

Make up your own mind.