‘This is our time’ – 1st MFPE Annual Conference 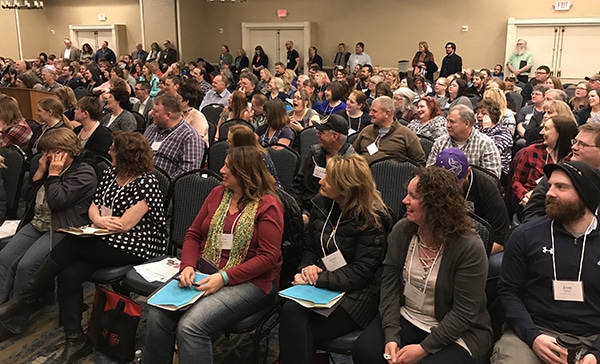 Some of the 400 delegates at MFPE Annual Conference April 6-7. See more photos after the story.

They came from all across Montana, from as far away as Sidney and Libby, to participate.

“As a history teacher it is always a good feeling to be on site when history is taking place,” said delegate Jesse Barnhart, who drove 406 miles from Broadus through snowdrifts, white-outs, and black ice.

“When your union calls, you say “YES!” said delegate Cara Lokken-Frandsen, who drove 455 miles from Sidney.

Laurie Enebo drove 360 miles from Glasgow. She and fellow delegates from Northeast Montana had a harrowing 24-hour drive home on treacherous roads, but they’re glad they made the trip.

“We travel the distance because it’s our union, it’s our way of life. We are proud to be the voice of our union brothers and sisters in MFPE’s District 7,” Enebo said.

These intrepid travelers and hundreds of others met to discuss and vote on their new union’s first budget, dues, officers, legislative program, and new business items.

The mood was upbeat and joyful as delegates tackled these chores and paused periodically to celebrate their new union. MFPE was created this year by the merger of MEA-MFT and the Montana Public Employees Association. Together, as MFPE, we have nearly 25,000 members statewide.

“If we want to keep the middle class vibrant, unions are absolutely crucial,” Tester told delegates. “We would not have a democracy today if not for public education and public services.”

Elections
Delegates elected statewide officers for MFPE. They elected regional members of the MPFE Board of Directors in their district caucuses. You can see officers and board members here.

Hall of Fame
As part of Annual Conference celebrations, three final members of the MEA-MFT Hall of Fame were honored, along with the first MFPE Hall of Fame member. All of these inductees have contributed mightily to the strength of our union and to the well-being of Montana’s people.

Tom Schneider, first executive director of the MT Public Employees Assoc., was inducted into the MFPE Hall of Fame.