MFPE Advocates for Montana’s Public Employees at the National Level

MFPE is the largest union in Montana and features a remarkably diverse membership. MFPE is also affiliated with the National Education Association (NEA), America’s largest union. Unlike MFPE, NEA has been slow to recognize its diverse membership. However, that is now changing thanks to MFPE member Patrick Wayne, a Social Service Technician for the Child and Family Services Division of DPHHS.

During the NEA Representative Assembly in July, Wayne introduced New Business Item #5, which directs the NEA to “review all existing governing documents (e.g. Policy Statements, Legislative Program, Resolutions, Constitution, and Bylaws) and where appropriate direct that these documents incorporate language that is democratically inclusive of all NEA members.”  The new business item further directs that “NEA shall use inclusive language in all future communications.”

As he proposed this change to the gathering of over 8,000 NEA members, Wayne stated, “NEA is no longer a union of only educators and has not been for some time. NEA is a union of public employees, all of whom NEA should recognize wherever possible in its governing documents and communications.”

Shortly after Wayne made his case, the assembly voted overwhelmingly to support the proposed new business item.

Fellow MFPE delegate Glen Southergill, an associate professor of communication at Montana Tech, gave Wayne accolades for his efforts. “Patrick Wayne spoke with a number of us in the spring. He wanted to learn more about the process, and how to approach making changes within the union,” said Southergill, MFPE’s NEA Director. “Patrick, as one delegate of 8,000, was singularly responsible for proposing a highly progressive change in the largest union in the nation. We supported it and worked together as a team, of course, but really he did a great deal to advance our cause.” 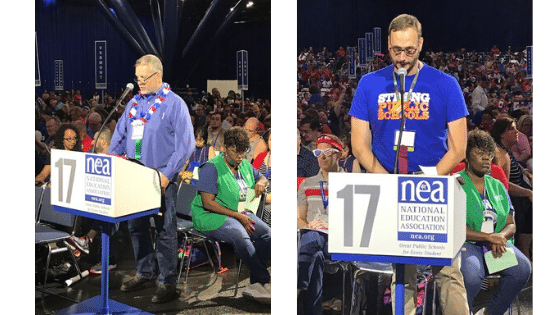 Wayne gave his rationale for his actions upon his return to Montana. “I’m proud to say that MFPE regards all its members as public employees,” he stated. “However, as I continued to educate myself on the structure of our union and its affiliates, I discovered that the NEA was not very inclusive of people who work outside the education field. Social workers, highway workers, highway patrolmen, and others have no recognition in the documents and communications of the NEA.”

Because of Wayne and MFPE, America’s largest union is now revising its communication efforts to embrace its entire membership, which includes public employees in virtually every sector. It is remarkable that a union of 24,000 is shaping the direction of NEA, a union of 3 million and it’s a testament to the new strength of our union following the merger of MEA-MFT and MPEA.

“I just wanted to help make life better for my coworkers,” said Wayne. “I’m convinced that unions are not something we pay others to do for us. Unions are us and we need to do the hard work.”