The Montana Federation of Public Employees inducted Wayne and Karin Stanford, Jerry Rukavina, and Sharon Carroll into the MFPE Hall of Fame on Thursday, April 8th, 2021, celebrating their notable contributions to our union, the largest union in the state of Montana and the most professionally diverse union in America. MFPE  honored the inductees in a virtual ceremony and celebration hosted by MFPE President Amanda Curtis. 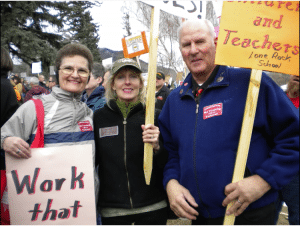 As educators in Ravalli County and in the Lone Rock School District, Karin and Wayne Stanford were integral to organizing the Lone Rock Unit of the MEA after the passage of Montana’s Public Employee Collective Bargaining Act of 1974. This was only the start of their continued dedication to unionism in the Bitterroot Valley – Wayne became the vice-chair for MEA Region 2, served on the MEA Board of Directors and is now a Board Trustee for the Lone Rock School District. Karin served on the NEA Resolutions Committee and later became the NEA Director, serving from 2009 to 2012. In their retirement, the pair remain devoted to unionism — “we’re both retired, but that doesn’t allow us to retire from our responsibilities to advocate for our public schools, public services, and public servants.” 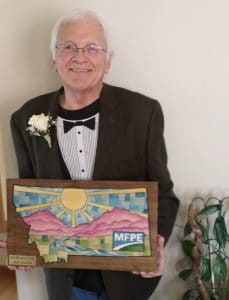 Inductee Jerry Rukavina got his start by teaching apprenticeship classes for the machinist union in Great Falls. Soon thereafter, he began teaching mechanics and related classes at Great Falls High School. As a member of the Great Falls Education Association, Jerry walked two picket lines –one in 1975 and another in 1989 – served as communications director, and was later elected president of the GFEA, serving from 1989 to 1995. He retired from teaching in 1995 and later that year became a regional NEA UniServ Director. Those who worked closely with him recount his unique sense of humor and undying dedication to unionism – “He was a never ending source of humor and advice.” Upon induction into the Hall of Fame, Jerry said, “The union has made the last 50 years of my life very positive…There’s nothing like it. I love this place, and I love these people.”

Finally, as a middle and high school math teacher in Ekalaka, inductee Sharon Carroll is often described as a “bona fide soldier of the cause in her local union.” Under her leadership as both president and bargaining chair, the Ekalaka Teachers Association has rightfully earned a reputation as a fierce advocate for teachers and students in southeast Montana. Sharon was appointed to the Montana Board of Public Education in 2007 and served for 12 years. While her service on the Board of Public Education was cut short when the current Montana Senate refused to confirm her appointment by former Governor Steve Bullock, she continues to engage in local unionism – she was actively involved in bargaining a safe, effective return to learning in the midst of the COVID-19 pandemic. Commenting on the challenges facing Montana,  Sharon had this comment: “Teachers matter. They matter a lot…Elections matter…science and math matter, now more than ever.”