Over three hundred delegates from across the state joined together via Zoom on Saturday, April 17 to conduct the Montana Federation of Public Employees (MFPE) Fourth Annual Conference.  The Annual Conference is MFPE’s highest governing body and is charged with electing officers, approving dues and budget, and establishing organizational and legislative priorities. 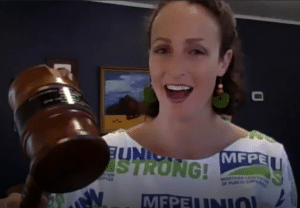 MFPE President Amanda Curtis kicked off the conference at 9 am by welcoming delegates and delivering introductory remarks.  Montana AFL-CIO Executive Secretary Al Ekblad addressed the delegates, applauding MFPE’s work during the 2021 Legislative session and imploring delegates to continue their advocacy and actions on behalf of Montana’s labor movement.

Delegates then started their work, debating changes to MFPE’s standing rules for the conference.    After a spirited discussion involving numerous delegates, the assembly approved a change in conference standing rules  requiring candidates intending to run for statewide elected positions d to announce their candidacy by March  1st of any election year.

The assembly adopted three new business items by sizable margins.  First was the creation  of the Eric Feaver Distinguished Leadership Award, an annual recognition of the accomplishments of MFPE members. New Business Item #2 calls for MFPE to endorse the Protecting the Right to Organize Act of 2021 and advocate for its passage. . Finally, New Business Item #3 directs MFPE to prioritize its  continuing effort to increase the number of MFPE members running  for office at all levels of government.

In the midst of conference votes and business, President Amanda Curtis provided a legislative update and call to action.  Curtis thanked MFPE members for their energetic activism, and recounted how MFPE has defeated numerous pieces of legislation that would have ended union rights, eliminated member jobs, and threatened Montana public employee pensions.  Curtis also celebrated legislative victories to secure a state employee pay plan, increase school funding,  and create mechanisms to increase pay for public safety workers.  The update culminated with Curtis asking all delegates to engage in legislative action during a short break in the conference.  Delegates barraged Montana legislators with hundreds of messages to reject HB 588, a bill that would have allowed the governor to fill over one thousand existing public employment positions with political appointees, regardless of qualifications or experience.  Delegates once again proved that collective action works: two days following the conference,  the Montana Senate defeated HB 588 on a 30-20 vote!

Finally, MFPE Treasurer Michelle Wheat and Executive Director Erik Burke presented delegates with  a proposed budget and dues policy for the 2021-2022 fiscal year . Delegates approved both the dues and budget proposal with a nearly unanimous vote, maintaining MFPE’s current dues levels with no increase.  The adopted budget will  allocate additional funds to organizing and communications efforts next year, as MFPE continues to grow our voice and engage our members.  President Curtis delivered closing remarks, stating,  “We stood together in this legislature, and we stand together in this union. This union is us. It’s about what we can do ourselves through our own collective action.”